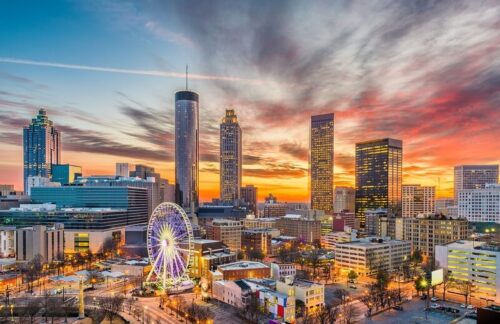 Atlanta, Georgia’s capital, is the primary center of the American South in almost every way. During the Civil War, the need for an important Confederate stronghold and supply base drove this decision. When Union General William Sherman captured it, it was reduced to ruins. The city began as a military outpost before developing into an early railway junction and quickly becoming an important commercial center. These events inspired Margaret Mitchell, an Atlanta native, to write the best-selling novel Gone with the Wind, which earned her the Pulitzer Prize.

Atlanta has developed into a significant economic and cultural center and an important air traffic hub. Coca-Cola and CNN are two of the world’s most well-known corporations with headquarters in this city. Here are some amazing tourist attractions for you. If you are struggling with a tight budget, we will suggest you how to book Cheap Flights To Atlanta.

The Georgia Aquarium is the world’s largest aquarium, housing a diverse array of marine life. Visitors can also participate in some very interesting and interactive activities. It is home to over 100,000 aquatic creatures, including the world’s largest whale sharks.

Rare albino alligators and trainers can be seen interacting with California sea lions. The Georgia Aquarium provides a one-of-a-kind opportunity to dive or snorkel in the shark tank. To participate in the dive program, visitors must have SCUBA diving certification. For those who prefer not to get wet, there is an acrylic tunnel through which you can walk and see fish swimming on all sides. There are also a chance to get amazing deals and offers on tickets so don’t forget to apply to avoid extra charges and get Cheap Flights ticket Atlanta.

The Atlanta Botanical Garden is beautiful with well-designed gardens, including formal flower beds and majestic trees that frame the Midtown Atlanta urban landscape. Because there is always something in bloom at the Botanical Garden, it is a great place to visit all year.

The Fuqua Orchid Center’s Orchid Display House, the Winter Garden, the Japanese Garden, the Conservation Garden, and the Desert House are among the highlights. Its main attractions are the Rose Garden and the Hydrangeas, which have the largest collections in the southeast. Of course, spring is a spectacular time with a riot of colors. Book your flight ticket To Atlanta and reach here.

Atlanta’s role in the American Civil Rights Movement of the 1950s and 1960s is commemorated by a beautifully designed interpretation center/museum that contextualizes this epic struggle within the larger global movement for human rights. The Center for Civil and Human Rights delves into the history of Jim Crow laws through actual television newscasts, photos, videos, personal accounts, speeches, and interactive experiences that immerse visitors in the struggle. Portraits and stories about their work pay tribute to the men and women who died in the conflict.

In the 1920s, the Fox Theatre was built as the Yaarab Temple Shrine Mosque, with a posh Arabian-themed design. It has a varied history, including issues during the Great Depression, but it has always been a well-loved landmark building since it was built. It is on the National Register of Historic Places. The Fox offers a wide range of entertainment options, including music and dance such as operas, ballets, rock concerts, and movies, with hundreds of performances each year.

At the Fernbank Museum of Natural History, you can learn about the prehistoric and modern natural worlds. Visitors can immerse themselves in exhibits that include dinosaur fossils, Georgia wildlife, cultural garments, and more. Visitors can also watch a movie at the Giant Screen Theater or eat light fare at the Fernbank Cafe. In addition, the museum offers a variety of outdoor experiences that can be accessed from the terrace. WildWoods has two scenic viewing platforms and special exhibits throughout the year. Fernbank Forest has over 2 miles of paved paths that allow visitors to explore the 65-acre forest.

The Oakland Cemetery honors the city’s contributions to both the Civil War and the civil rights movement. Some well-known Atlantans are buried among the 70,000 graves, including golfer Bobby Jones, author Margaret Mitchell, and musician Kenny Rogers. Around 7,000 Confederate soldiers are buried in the Confederate burial grounds, with another 7,500 in Potter’s Field. Among its winding paths, trees, and flower shrubs, you’ll find elaborate mausoleums, intricate statues, and an impressive collection of art and architecture. People buried in Potter’s Field are those who could not afford to be buried, and many of them are unknown; they come from a variety of races and religions.

The College Football Hall of Fame

The College Football Hall of Fame is located in Centennial Olympic Park in downtown Atlanta. It is a sprawling 22-acre property with artwork, pools, fountains, and lush grass. The park was originally built for the Olympic Games in 1996 and served as a focal point of the festivities. It is now one of the city’s most popular destinations. Recent visitors noted that the fountains were popular with families, particularly young children, and suggested bringing a change of clothes if your children will be splashing around in the water. Previous visitors lauded the park’s proximity to must-see attractions like the Georgia Aquarium. The park is also a stop on several of Atlanta’s best tours.

Krog Street Market is a food hall in Atlanta’s Inman Park neighborhood housed in a former stove factory. Small-batch chocolate, ice cream, craft beer, and other items are available at specialty stores. The cuisine served in restaurants ranges from Chinese-style dumplings to soul food to pizza. The Cottage, a historic house from the 1920s that was relocated to a location adjacent to the former industrial facility in 2013, now houses a retailer selling home and garden items and vintage clothing. Book your tickets from Flight booking to Atlanta and visit Krog Street Market.

The Ponce City Market is now a massive mixed-use complex with offices, boutique shopping, education centers, coffee shops, restaurants, and other amenities. The roof of the building is also an attraction in and of itself, housing two distinct draws. Visitors generally enjoy Ponce City Market, praising the diverse and delicious food options. The roof and its attractions are also well-liked by visitors. Skyline Park, a rooftop restaurant, and 9 Mile Station, where visitors can play Skee-Ball and mini-golf or take a ride down a slide. Others were dissatisfied with the complex’s difficult navigation and complained about overpriced food and difficult, expensive parking.

Places one must not miss when holidaying in Mussorie

Is Your Personal Phone Number Being Used for Business Purposes? Why Shouldn’t You Do It?

A Run-through on Medical Tourism Industry in India

What are the Things to Do in Chicago?