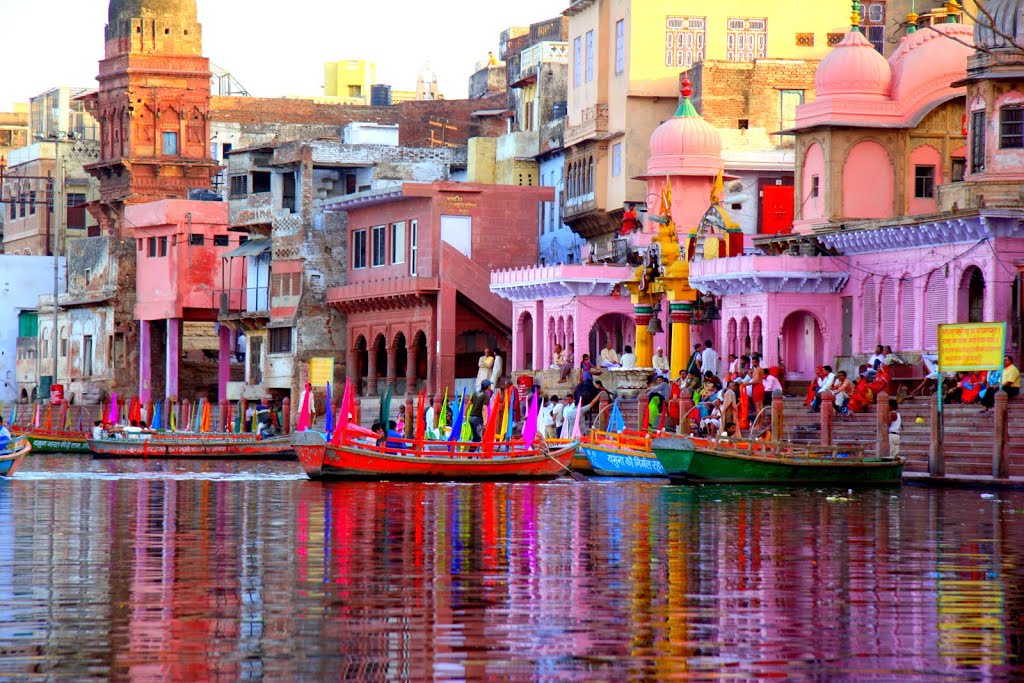 This is the holy city of God Krishna, located on the banks of the Jumna. Here, according to myths, he was born in prison, where his mother was imprisoned by the evil ruler Cansa, who was her brother. The reason for his disfavor was the fact that he was predicted that he would be killed by his nephew, and therefore he allowed only her husband to visit her in prison, and ordered to destroy all newborns. But when Krishna was born, the guards were put to sleep by the supreme power of the god Vishnu (incarnated as Krishna), and the father was able to carry the boy to the other side of the river and give up there for raising to the family of shepherds, where Krishna grew up and became a shepherd.

All the neighborhoods of Mathura are considered sacred, and especially the gardens and groves of Vrindavana, where Krishna has reached a young age. In the city and in these holy places there are hundreds of temples dedicated to Krishna, his childhood and about the Holy Trinity. The cult of the sacred cow is concentrated here, and these animals roam freely in the streets, entering courtyards and temples.

In Vrindavan there is one of the renowned pilgrimage sites – the “Garden of Krishna”; the forests around these centers are also revered, and, most importantly, the peacocks, who loved the young god, accompanying him. In all iconographic or popular prints, he is always depicted with the sultan of peacock feathers adorning his hair. Probably due to this cult attitude to the peacock, this bird was officially recognized as the state bird of India.

The river near the city is teeming with turtles, which are fed by both city residents and all visitors to the city, treating them with loving care – after all, the second incarnation of Vishnu on earth was a turtle, and many turn to these animals with prayer or, at least, take them to tinged hope for the manifestation of God’s grace.

On the days of the spring holiday of Holi, associated with the name of Krishna, Mathura is overwhelmed by many thousands of pilgrims and solemn services are held in all the temples. Here, in all markets, diverse images of Krishna in the form of a baby are sold in which Hindu women adore him. Here you can buy a figure of a baby slider decorated with real jewels, but also simple clay or wooden figures of Krishna.

Mortgage Loans In Vijayawada: Your Way To Save Taxes And Property Costs

5 Things to Know while Applying for Chartered Accountant Loan

Unique Things to do in Albuquerque

Most visited tourist attraction in Hamilton?