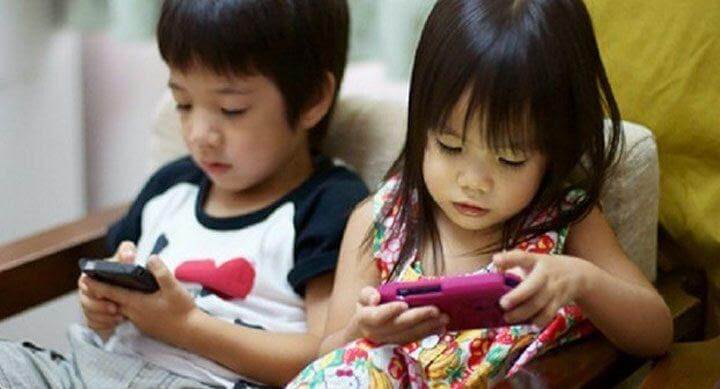 Which parent never gave a child a cell phone or tablet to avoid him crying, tantrums or even to keep their child out of a mess? This tactic may not be ideal, according to a Canadian study.

Letting a young child use electronics with screens for a long time can delay the development of language skills and sociability. The survey, which followed around 2,500 2-year-old children, is the newest in the debate over what is the safe time limit for using electronics.

Between 2011 and 2016, mothers were consulted about the time spent using screens (cell phones, TVs, video games, computers, etc.) and filled out questionnaires about their children’s skills and development when they were two, three and five years old.

At the age of two, children spent an average of 17 hours in front of screens a week. This increased to about 25 hours at age three, but dropped to about 11 hours at age five, when children started in primary school.

The findings suggest that there is an increase in the use of screens before any developmental delays are noticed. However, it is not clear whether the increased use of screens is directly responsible for the delay in development.

The longer time with screens can be linked to other factors for developmental delay, such as the way the child is educated and what the child does in the rest of his leisure time.

What is the limit?

The study does not make any recommendations on the ideal limit for the use of screens. The American Pediatric Association (AAP), however, makes some indications:

The Canadian Society of Pediatrics recommends that children under 2 years old should not use screens.

In the UK, where there is no set limit, the Child Health care center says there is insufficient evidence to establish a negative effect on children. Even so, the organization recommends that families ask themselves:

If the answers are satisfactory, then everything is likely to be going well.

What to do to reduce usage?

The American association advises families to delimit periods when the media is not used, such as meals or car trips, or places in the home where use is not permitted, such as bedrooms. With that, they should limit their kids’ screen use with screen time limit app such as FamilyTime. The app lets parents schedule a remote lock on kids’ devices along with managing their consumption. If you wish to see how does the app work, give it a try for free. You can get the trial version of this app from the app store on your phone.

Know the Market Prospects of Platform Supply Vessel for Sale

How to Construct Your Manchester Office in a Breeze

Where to Buy a Good Sofa Not Too Expensive?

Buying Sectional Covers: Change Your Couch Inside Out